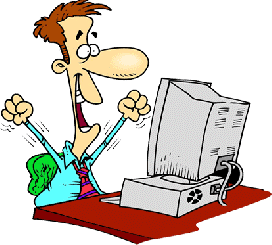 One of their offers included “content bundles.” For example, three articles and 40 social media posts each month will cost you $99 for 1,500 words.

Maybe it sounds self-serving, but I’m concerned about this service offering.

The general consensus now suggests “content is king.” Your online info will be read if it is of serious interest to the readers you are targeting as well as SEO-friendly. Moreover, such content needs to be free of grammatical errors, typos and plagiarism.

It makes sense to hire an experienced freelance writer who can work with rough notes, industry research, client success stories and other materials. She can turn such information into compelling copy — content that tells a brand story, demonstrates positive impact, and builds influence. Please plan to pay more than $99 for 1,500 words for this process. But, be confident that what you look like online matches the quality work you provide.

If the content marketing budget can’t exceed $99 a month, talk to a good writer who can produce 1 or 2 pieces of quality material. Less may very well be more!  A client testimonial, an industry event, an inspirational quote, a staff bio, an image with a caption, or a factoid can all provide strong content on a limited budget.

Don’t hesitate to contact me if you need a Toronto-based freelance writer to have a look at your content and evaluate its effectiveness.

This is the first Selfies Election in Canada. Watch this fun clip by Marie Esperance Cerda of Canadian Press Selfies as PR strategy 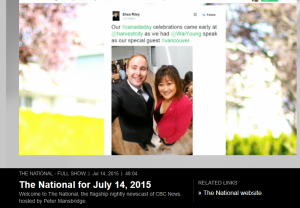 This July 14 was an exceptionally heavy news day. The historic nuclear deal with Tehran, the Pan Am games, and the first photos of Pluto competed for airtime.

Yet, an obscure fur trader in St. John’s, NFL, and Conservative backbencher Wai Young in Vancouver made the editorial lineup on CBC’s The National.

Blame the “celebrity factor” for our furrier’s moment of fame. Bernie Halloran is a smart business man. One of Rod Stewart’s entourage asked him to rent some of his fur coats for the women about to accompany the singer on an outdoor stage in chilly St. John’s. Instead, Halloran offered to loan the outfits at no cost. Pure PR instinct, I suggest. The decision earned the merchandiser a selfie with the celebrity wearing a sealskin coat. Of course, the savvy Halloran posted the shot on his Twitter feed. Next, anti-fur activists responded by lambasting Stewart for wearing seal fur. In this case, all publicity is good publicity. “It’s the middle of July, people are talking about fur. It’s pretty cool,” concluded Halloran in an interview with CBC’s Ian Hanomansing.

Let’s blame the complete absurdity of our MP Young’s comments about the Air India disaster for her spot on The National. She delivered her talk at a relatively small church at the fringes of main stream Canadian Christendom. The pastor shared his selfie with the MP with his very modest number of Twitter followers. Next, the MP’s comments spread into the wider, secular world.

First, no matter who you are and where you are, watch those selfies.

And, of course, the two stories  demonstrate once again the fascinating interdependence of legacy media outlets and social media even on a day when history is made in outer space and right here on earth.

Have you noticed the improvised signs popping up in public bathroom? (see illustration!)

With the gradual switch to electronic toilet flushing, we seem to be a bit confused these days about bath 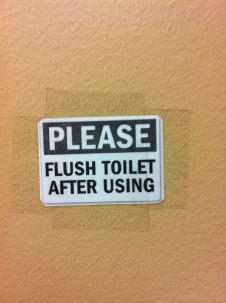 room etiquette. To flush or not to flush? The slow introduction of new technology can have unintended consequences.

How could this possibly be related to introducing a new visual brand identity – a new logo?

In 2008, with the launch of the Beijing Olympic Games, Bell launched a new corporate brand. Except, someone apparently decided it was either too expensive or logistically impossible to re-paint hundreds of service vehicles – billboards on wheels, all of them. In fact, the Bell vans on the road undermined expensive billboard advertisements along the road. The “wow factor” of the new brand was compromised, I thought.

More recently, a neighborhood non-profit in Toronto repeated the Bell story. The charity adapted its name and introduced a new logo. The move was overdue and well done. Again, I noticed that the organization’s vehicles driving through my neighbourhood still carried the agency’s original logo and name. So did a large sign displayed on their building.This continued for at least a full year.

Unfortunately, reinventing an organization’s visual identity is an expensive proposition. Before an organization considers going ahead with the project, it may be wise to make a complete list of absolutely every customer touch point: biz cards, baseball caps, vehicles, social media platforms, displays, printed marketing collateral, packaging materials and, likely, many other items. Can the organization introduce the new logo everywhere within a reasonable amount of time? If not, what items need to be prioritized and why?

Some other questions an organization may wish to ask: Have we really done an honest cost/benefit analysis for the brand project? Does it make more sense to make this change during an upcoming anniversary year and build some general PR around the new brand launch? How much would it hurt to wait a few more years so budget can be set aside to cover all associated costs? (Meantime, existing marketing materials can be used up or re-produced in much smaller quantities.)

A gradual introduction of a new brand identity may be necessary to spread costs, but it can threaten the very reasons for doing the exercise in the first place.